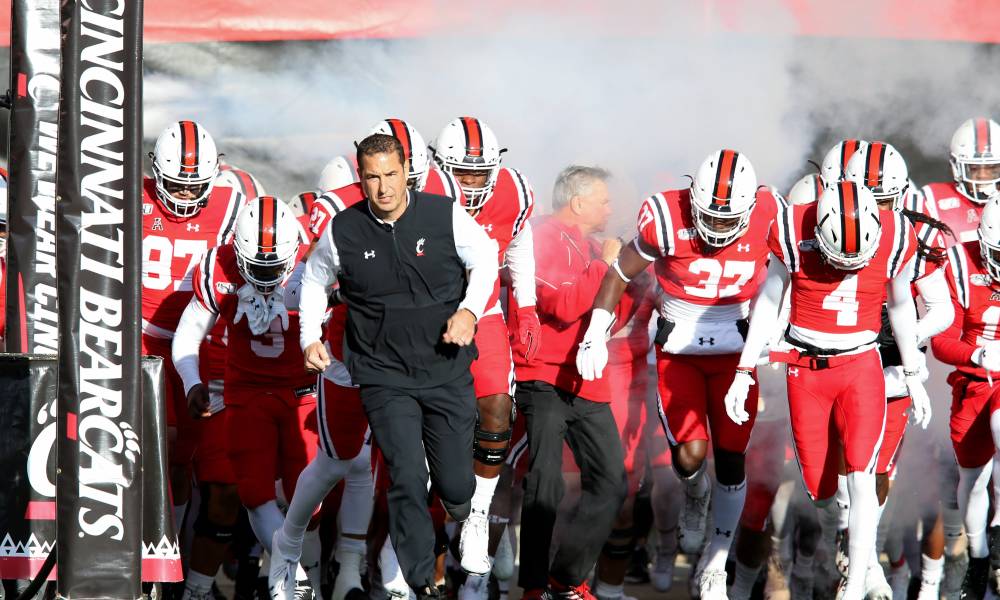 OK, maybe not every game needs a name but that doesn’t mean No. 7 Notre Dame’s clash with No. 8 Cincinnati this weekend isn’t huge.  For the Irish it would appear to be the toughest remaining test this season, not to say there aren’t challenges in the weeks and months to come.

For Cincinnati it’d be the marquee win that they must have if they hope to crash the College Football Playoff party at the end of the year.

Ahead of Saturday’s huge matchup here the five most important things Cincinnati head coach Luke Fickell had to say:

“The unique thing is I’m sure that it’s not been something for the last two months that they’ve been completely working on, having Florida State and Wisconsin and Purdue and all that other stuff. But I think there obviously will be some familiarity on both sides of the ball, from things that we do and things that they’ll do defensively just by the nature of being around guys for a really, really long time. But like anything, there’s always changes. I mean, Mike Tressel brought things into us that might not be natural or normal to the people watching, unless you’re actually breaking things down and I’m sure watching their defense a bit, there’s a lot of things that are different as they’ve kind of evolved in one year. The familiarities, I think you have some ideas of that, but once the balls kicked off, I think a lot of those things go out the window and it has a lot to do with obviously the preparation and making adjustments.”

“They’re a really good football team. I think the unique thing that you notice and see is they’ve been battle tested and I don’t know that you would probably say that. For us for instance, we’ve been battle tested a little bit just because we didn’t play well in the first half of games and obviously the Indiana game being on the road was a battle test. These guys have been tested each and every week. They’re used to it in the sense that they always get everybody’s best because of who they are. But to see how they’ve won and what they’ve had to go through to win, I think it tells you that they’re a really good football team and a really good football program and that’s how you grow. You can see them getting better and better, whether they had to come, not from behind, but score 31 points in the fourth quarter of last week’s game. You just see a team and a program that plays well down the stretch as they get better, whether it’s in a game or in a season, that’s when you know you’re in for a battle.”

3. On bigness of Notre Dame game for Cincinnati program

“It’s big. We’re not gonna lie to you. But like I said, once the things kicked off, you can’t let all the emotions of all the different stuff that’s going on affect you in how you go about things. What I mean by that is the emotions throughout the week that can drain you, because you need to be at your best on Saturday and that’s where I struggle in a lot that I do, the emotions of the whole week of preparing. Then all of the sudden you get to Saturday and what energy and stuff do you have left. There’s kind of a good balance. I think even our 18 to 20 year olds, our kids do a better job of that because they’re used to the emotional swings of everyday life, where some of us like to get into a routine and kind of stick with it. Then you get some of these ones, obviously it’s a big game anytime you play Notre Dame. Notre Dame is obviously a top five program and it just happens to be a year where we’re both really good and ranked high, but I think that more than anything is you got to go about the process of making sure you stay focused and not spending too much of your emotions worried about all the other things that are going on with it, because it’s two Top 10 teams.”

2. What would win vs. Notre Dame prove?

“Proving it is one thing. Let the outside people talk about that. We like to prove things to ourselves too, but it is definitely a measuring stick where we said when you play Georgia, you’re playing a Top 10 program and when you’re playing Notre Dame, you’re playing a Top 5 program. There’s nobody that’s been historically, and I don’t mean over 100 years, I mean in the last five years, in the playoffs and things like that, one of the best teams in the country. That to us is a big deal. But again, to the 18 to 22 year olds, the here and the now, those kinds of things aren’t as much into the wheelhouse as, okay what’s important to these guys. This is an opportunity to go from 3-0 to 4-0. It’s a very big game, control the emotions of things, but it is an ultimate measuring stick in all that we do. I think that’s what’s great for us as a program.”

“We’ll arrive on Friday, go over to the stadium. We’re staying two or three minutes away from the stadium, so we’ll have an opportunity to go in there, kind of just walk around, get the lay of the land, let them see the thing and everything like that, take the pictures or whatever. Because the same thing, when you go over there on Saturday, you want them to be focused on the things that they got to do. It’s already going to be difficult enough to not have any of those other distractions. so try to get that out of the way because it’s a big deal and there’s not a kid on this team that has played over there other than obviously Michael Young, but for the most part. There’s obviously some incredible history for us to be able to absorb and soak in.”

‘Intercourse and the City’ stars pay tribute to Willie Garson