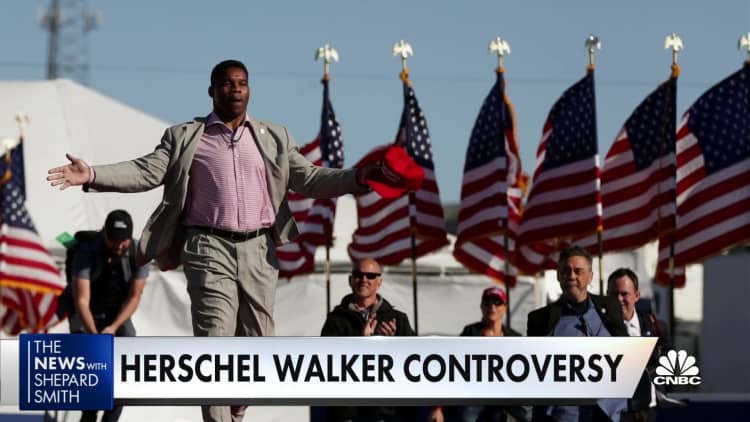 Herschel Walker’s Senate campaign has raised over $500,000 since the anti-abortion Republican appeared on Fox News to deny a shocking report that he had paid for a woman’s abortion years earlier, a campaign official told CNBC on Wednesday.

Walker appeared on “Hannity” on Monday evening shortly after The Daily Beast published the allegation from an anonymous woman, who accused Walker of urging her to get an abortion after she became pregnant when they were dating in 2009.

“It is a flat-out lie,” Walker said when Fox host Sean Hannity asked him about the report. Walker’s accuser supported her claims with a receipt from the abortion clinic, a “get well” card from Walker and an image of a personal check signed by him, according to The Daily Beast.

U.S. Republican Senate candidate for Georgia, Herschel Walker speaks to media at a campaign event on September 9, 2022 in Gwinnett, Georgia.

Walker raised $50,000 during that interview alone, a source close to his Senate bid told NBC News on Tuesday. The person called the haul a record for the campaign.

Walker’s Democratic rival, incumbent Sen. Raphael Warnock of Georgia, has trounced the Republican in campaign fundraising. In the last fundraising quarter, Warnock’s campaign took in an average of almost $292,000 per day, NBC reported.

Warnock’s campaign has raised more than $60 million so far, versus about $20 million taken in by Walker, according to OpenSecrets. 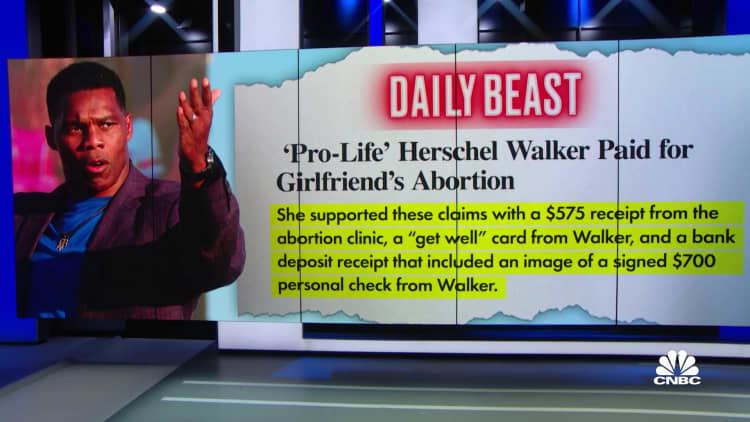 Despite Warnock’s fundraising edge, the candidates appear to be running neck and neck. Warnock holds only a slight lead in polling averages.

The Senate race in Georgia, a swing state where President Joe Biden narrowly beat then-President Donald Trump in 2020, is one of several key elections that will determine which party controls the Senate after November’s midterm elections.

The fundraising windfall for the scandal-plagued GOP Senate hopeful came as top Republicans, including Trump, defended Walker against The Daily Beast’s bombshell report.

“Herschel has properly denied the charges against him, and I have no doubt he is correct,” Trump said in a statement Tuesday on his Twitter-like platform Truth Social.

Meanwhile, in a series of Twitter posts after The Daily Beast story published, Walker’s adult son Christian accused his father of lying and threatening violence against family members.

“Every family member of Herschel Walker asked him not to run for office, because we all knew (some of) his past. Every single one. He decided to give us the middle finger and air out all of his dirty laundry in public, while simultaneously lying about it,” Christian Walker tweeted.

While the elder Walker has not responded specifically to Christian’s claims, he said Wednesday that he loves his son “unconditionally.” Walker added that he is “living proof that you can make mistakes and get up and keep going forward.”

Walker, a 60-year-old former football star, has run a scandal-plagued campaign for office. His ex-wife Cindy Grossman accused him of threatening to kill her, and Walker confirmed that he has more children than were previously known.

Everything new coming to Disney+ UK in March 2021