Around 5 in the afternoon on Christmas Day in 2020, as many Americans were celebrating with family, President Donald J. Trump was at his Mar-a-Lago home in Palm Beach, Fla., on the phone with a little-known conservative lawyer who was encouraging his attempts to overturn the election, according to a memo the lawyer later wrote documenting the call.

The lawyer, William J. Olson, was promoting several extreme ideas to the president. Mr. Olson later conceded that part of his plan could be regarded as tantamount to declaring “martial law” and that another aspect could invite comparisons with Watergate. The plan included tampering with the Justice Department and firing the acting attorney general, Jeffrey A. Rosen, according to the Dec. 28 memo by Mr. Olson, titled “Preserving Constitutional Order.”

“Our little band of lawyers is working on a memorandum that explains exactly what you can do,” Mr. Olson wrote in his memo, obtained by The New York Times, which he marked “privileged and confidential” and sent to the president. “The media will call this martial law,” he wrote, adding that “that is ‘fake news.’”

The document highlights the previously unreported role of Mr. Olson in advising Mr. Trump as the president was increasingly turning to extreme, far-right figures outside the White House to pursue options that many of his official advisers had told him were impossible or unlawful, in an effort to cling to power.

The involvement of a person like Mr. Olson, who now represents the conspiracy theorist and MyPillow chief executive Mike Lindell, underscores how the system that would normally insulate a president from rogue actors operating outside of official channels had broken down within weeks after the 2020 election. 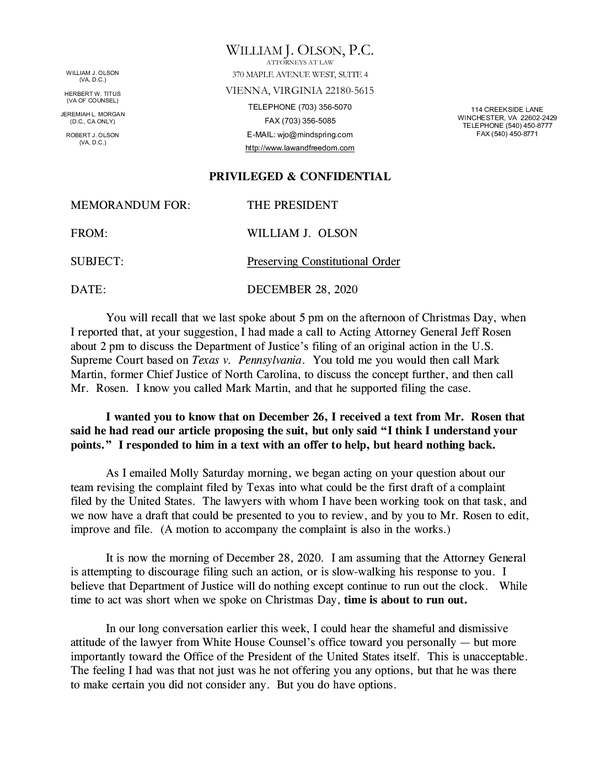 That left Mr. Trump in direct contact with people who promoted conspiracy theories or questionable legal ideas, telling him not only what he wanted to hear, but also that they — not the public servants advising him — were the only ones he could trust.

“In our long conversation earlier this week, I could hear the shameful and dismissive attitude of the lawyer from White House Counsel’s Office toward you personally — but more importantly toward the Office of the President of the United States itself,” Mr. Olson wrote to Mr. Trump. “This is unacceptable.”

It was not immediately clear how Mr. Olson, who practices law in Washington, D.C., and Virginia, arrived in Mr. Trump’s orbit. Mr. Olson previously worked with Republican super PACs and promoted a conspiracy theory that Vice President Kamala Harris is not eligible to be vice president, falsely claiming she is not a natural-born U.S. citizen. He and his firm have long represented Gun Owners of America, an advocacy group.

According to his website, which displays a photograph of him shaking hands with President Richard M. Nixon, Mr. Olson was a White House intern in 1971.

Key Revelations From the Jan. 6 Hearings

His 2020 memo was written 10 days after one of the most dramatic meetings ever held in the Trump White House, during which three of the president’s White House advisers vied — at one point almost physically — with outside actors to influence Mr. Trump. In that meeting, on Dec. 18, the lawyer Sidney Powell and Michael T. Flynn, the former national security adviser, pushed for Mr. Trump to seize voting machines and appoint Ms. Powell special counsel to investigate wild and groundless claims of voter fraud, even as White House lawyers fought back.

But the document suggests that, even after his aides had won that skirmish in the Oval Office, Mr. Trump continued to seek extreme legal advice that ran counter to the recommendations of the Justice Department and the counsel’s office.

And the memo indicates that Mr. Trump was acting on the outside advice. At one point, it refers to the president urging Mr. Olson to contact the acting attorney general about having the Justice Department lend its credibility to Mr. Trump’s legal efforts to invalidate the election results.

A person familiar with the work of the House committee investigating the Jan. 6 attack on the Capitol said the committee was aware that Mr. Olson was in contact with Mr. Trump and that it was exploring Mr. Olson’s role in pushing forward plans to overturn the 2020 election.

Mr. Olson did not respond to requests for comment.

A spokesman for Mr. Trump did not respond to a request for comment about the former president’s relationship with Mr. Olson.

According to his memo, Mr. Olson was discussing with Mr. Trump the notion that the Justice Department would intercede with the Supreme Court to reverse his electoral defeat.

The court had declined to hear a case that allies of Mr. Trump in Texas had brought challenging the election results in Pennsylvania, saying the plaintiffs lacked standing.

Mr. Olson told Mr. Trump that he believed the Justice Department “will do nothing except continue to run out the clock.”

“While time to act was short when we spoke on Christmas Day, time is about to run out,” he wrote.

It was unclear which White House lawyer Mr. Olson described as dismissive in his memo. At the time, the White House counsel, Pat A. Cipollone; Patrick Philbin, his deputy; and another lawyer who did not work for the counsel’s office, Eric Herschmann, were working in tandem to push back on some of the more outlandish ideas being recommended. Mr. Cipollone and Mr. Herschmann had taken lead roles during the Dec. 18 White House meeting in countering Ms. Powell and Mr. Flynn.

“The feeling I had was that not just was he not offering you any options, but that he was there to make certain you did not consider any,” Mr. Olson wrote, referring to the unnamed White House lawyer. “But you do have options.”

Among those whom Mr. Olson mentioned as speaking to Mr. Trump about the Justice Department getting involved was Mark Martin, the former chief justice of the North Carolina Supreme Court. White House officials believed at the time that Mr. Martin was brought in through Mark Meadows, the White House chief of staff.

Mr. Olson urged Mr. Trump to hire another lawyer, Kurt Olsen, who had worked on the Texas case.

“As I emailed Molly Saturday morning,” Mr. Olson wrote, referring to Mr. Trump’s assistant, “we began acting on your question about our team revising the complaint filed by Texas into what could be the first draft of a complaint filed by the United States. The lawyers with whom I have been working took on that task, and we now have a draft that could be presented to you to review, and by you to Mr. Rosen to edit, improve and file.”

In his memo, Mr. Olson recounted that during their discussions, he had told Mr. Trump that he had followed the president’s suggestion to call Mr. Rosen a few hours earlier requesting that the acting attorney general file a lawsuit to try to block Joseph R. Biden Jr.’s Electoral College victory.

Mr. Trump, based on Mr. Olson’s memo, was aware that Mr. Rosen was slow-walking his request. The suit was never filed; Mr. Rosen testified last month before the Jan. 6 committee that doing so was out of the bounds of the law.

A spokesman for Mr. Rosen said that he did not recall speaking with Mr. Olson, but that it was accurate that the acting attorney general was against filing any lawsuits to interfere with the election results.

“I do not believe you can do what is required to be done from Florida,” Mr. Olson wrote to the president. “And, it would send a message about your commitment to the task, to leave Mar-a-Lago to take charge at the White House. I urge you to return as soon as it can be arranged.”

Mr. Olson encouraged Mr. Trump to fire or reassign Mr. Rosen should he not go along with the plans to use the Justice Department to challenge the election in court, though Mr. Olson acknowledged such action would draw negative news coverage.

“This step will likely bring on a thousand stories making an analogy to ‘Saturday Night Massacre’ in 1973 when President Nixon ordered AG Elliot Richardson to fire Archibald Cox as a special counsel investigating Watergate,” he wrote.

Mr. Olson also urged changes at the White House Counsel’s Office. He wrote that a new White House counsel should take steps to ensure a “fair election count,” though he conceded that would be seen by the news media as “martial law.”

Nicholas Goldberg: Trump’s view — How can I make money off it?

Clinical doctors frustrated with ‘selfishness’ of unvaccinated of us, protesters

Demi Lovato: My Feelings Got the ‘Superb of Me’ In the course of Mammoth...