On Tuesday, the committee is expected to focus on “efforts to assemble that mob on the mall” including who financed it, said Rep. Adam Schiff, D-Calif.

Six weeks after he lost the 2020 election, then-President Donald Trump took to Twitter to falsely allege that it was “statistically impossible” for him to have lost to his Democratic rival Joe Biden. He then summoned his supporters to Washington for a “Stop the Steal” protest ahead of Jan. 6, 2021, the planned date of the official certification of the electoral vote by Congress.

Members of the House committee investigating the attack allege that Trump’s tweet amounted to a call to arms to members of two violent right-wing extremist organizations, the Proud Boys and Oath Keepers, and say they have information suggesting they worked to help him block the certification of Biden’s electoral college win and stop the peaceful transfer of power.

The showdown at the Capitol, they said in their first six hearings in June, took on added significance when other efforts by Trump to overturn the election had failed. Those include an intense Trump-led campaign to pressure Vice President Mike Pence, state election officials and even the Justice Department to do his bidding.

Missed the Jan. 6 hearings?: What you need to know before they resume this week

On Jan. 6, after a fiery speech by Trump at the nearby ellipse, columns of Oath Keepers – wearing helmets, paramilitary vests and military-style insignia – marched through the mob of protesters and up the Capitol steps in two consecutive military-style “stack formations.” Some reportedly later went looking for House Speaker Nancy Pelosi and Pence.

Hundreds of members of the Proud Boys began converging on the Capitol long before Trump told his followers to do so and led the earliest assault on police that allowed the mob to stream into the complex.

On Tuesday, the committee is expected to focus on “the efforts to assemble that mob on the Mall, who was participating, who was financing it, how it was organized,” according to committee member Rep. Adam Schiff, D-Calif.

Schiff and other committee members have said that the committee will provide new information about the potentially critical roles played by the Oath Keepers and Proud Boys in attacking the Capitol.

The 1 p.m. ET hearing will also focus on whether anyone in the Trump White House engaged in a seditious conspiracy with leaders of the two groups to overturn the election results by storming the Capitol. Two Democratic committee members, Reps. Jamie Raskin of Maryland and Stephanie Murphy of Florida, are expected to lead the questioning of witnesses.

More: Is the Jan. 6 committee sitting on explosive evidence of Trump’s role in the Capitol assault?

What will the Jan. 6 committee say about Trump and the extremists?

Whether the committee has actual evidence of such cooperation remains to be seen.

But committee members and witnesses have hinted broadly that that is the case since the first prime-time hearing on June 9, when committee Vice Chair Liz Cheney, R-Wyo., said Trump “oversaw” a plan to overturn the election.

“President Trump summoned the mob, assembled the mob, and lit the flame of this attack,” Cheney said in her opening remarks that evening and referred to “plots to commit seditious conspiracy.”

“In our hearings to come,” Cheney added, “we will identify elements of those plans and we will show specifically how a group of Proud Boys led a mob into the Capitol building on Jan. 6.” 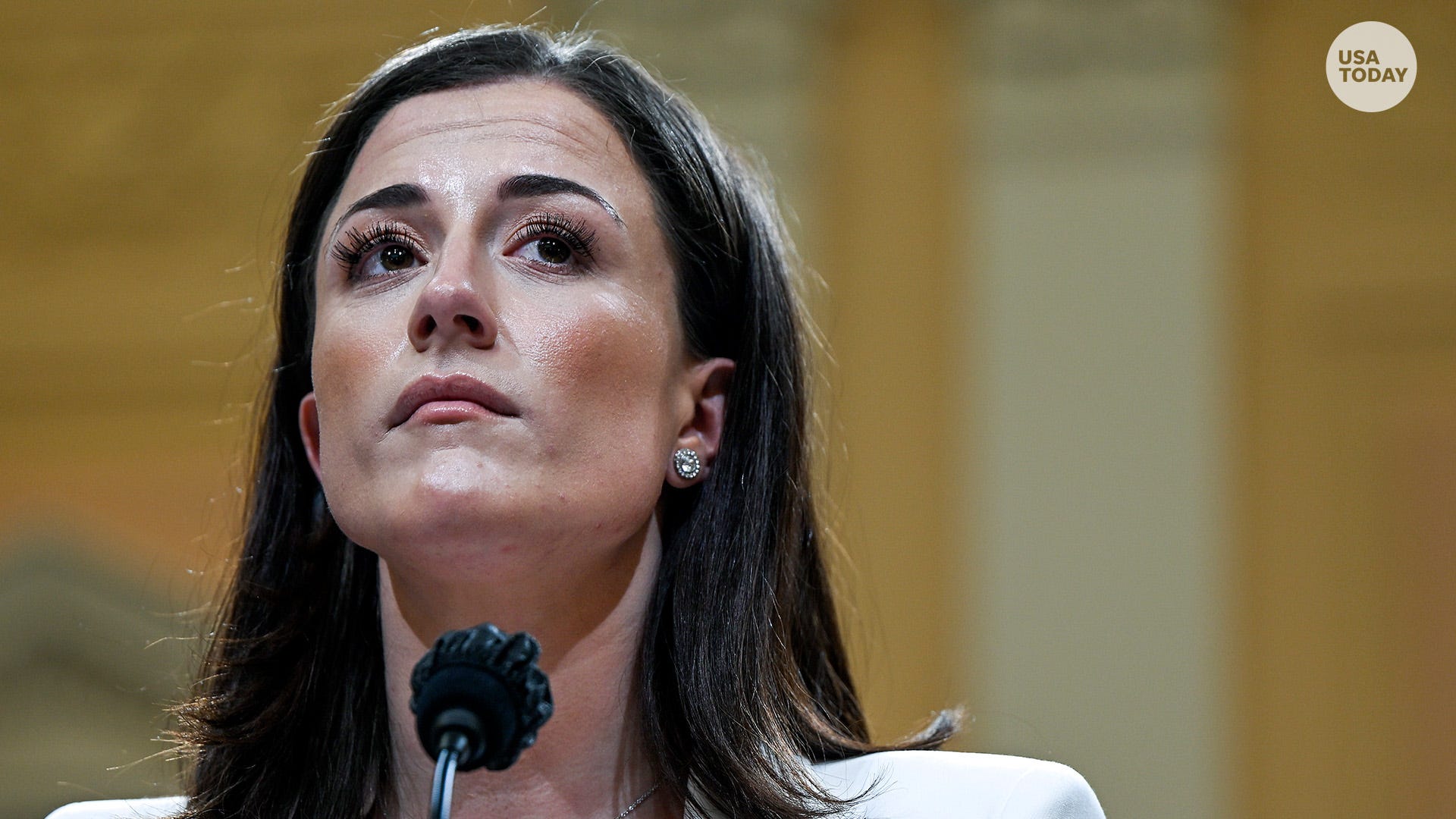 During Trump’s rally held on Jan. 6, Cassidy Hutchinson says she overheard Trump tell staff that he didn’t care whether people had weapons.

Committee Chairman Bennie Thompson went even further, saying the exhaustive congressional investigation is prepared to bring forward witnesses that describe actual conversations between these extremist groups and someone or some people, in “Trump’s orbit.”

After the committee aired video footage of a parking garage meeting between the leaders of the two far right groups on Jan. 5, 2021, Thompson, D-Miss., told CNN that the committee has  “a number of witnesses who have come forward that people have not talked to before, that will document a lot of what was going on in the Trump orbit while all of this was occurring.”

The 187 minutes: On Jan. 6, Trump was out of public view as aides urged him to act. A breakdown of those 187 minutes.

What dots will be connected?

Tuesday’s hearing will be the first since Cassidy Hutchinson, a former aide to Trump chief of staff Mark Meadows, delivered bombshell testimony on how Trump knew some of his supporters were armed but told them to march to the Capitol anyway.

She also testified that Trump demanded that the Secret Service drive him from his morning speech to the Capitol so he could accompany the mob and give a second speech – perhaps inside the complex while lawmakers were counting the vote. She described how White House Counsel Pat Cipollone warned her that, “We’re going to get charged with every crime imaginable” if they allowed Trump to go to the Capitol.

And Hutchinson testified June 28 that Trump instructed Meadows to talk on Jan. 5 with some of his associates in various “war rooms” at the nearby Willard hotel who were plotting various ways of trying to halt the transfer of power, including some who had links to the Proud Boys and Oath Keepers.

On Sunday, various committee members said they will be connecting the dots between the extremist groups and those “in government circles to overturn the election.”

More: Is there a link between Jan. 6 suspects and Trump’s inner circle? FBI’s questions show hunt is still on

The latest on key players and witnesses:

Some of the testimony is expected to focus on Trump associates and supporters who were allegedly planning ways to stop the counting of the electoral vote on Jan. 6, after Trump realized that all other efforts had failed, according to recent TV appearances by various committee members. That included pressuring Pence to delay Congress’ certification of the electoral vote count, or accept a fake slate of pro-Trump electors.

Committee members and witnesses have focused intensively on the so-called Willard hotel “war rooms” in the days before the Capitol siege – and whether any of the participants are implicated in seditious conspiracy activities.

Potential associates in those plans include Stone, Bannon, Alex Jones of InfoWars and Trump’s personal lawyer Rudy Giuliani. All of them were bunkered in at the hotel in the run-up to Jan. 6. Some, including Stone, did not attend Trump’s rally and none of them are believed to have participated in the actual breach of the Capitol.

Evidence presented by the committee suggests that various “war rooms” focused on how to stop the vote count on Jan. 6. And some of the participants, Stone in particular, had connections to the Proud Boys and Oath Keepers.

Cheney said U.S. Capitol Police issued a report Jan. 3, 2021, noting “the Proud Boys and other groups planned to be in Washington, D.C., on Jan. 6,” and that they planned to target Congress rather than counter-protesters.

Hutchinson testified in a videotaped deposition she heard “the words ‘Oath Keepers’ and the words ‘Proud Boys’ closer to the planning of the Jan. 6 rally when Mr. Giuliani would be around.”

On Tuesday, one potentional focus could be footage from Holder, a documentary filmmaker who Trump gave extraordinary access in the run-up to the November election, and the Capitol attack.

Also expected: more details about the alleged role played by Stone, a longtime Trump confidante whom the committee has been investigating for a potential role as a liaison between two right-wing extremist groups who attacked the Capitol and those in Trump’s inner circle.

Leaders of the Proud Boys and the Oath Keepers have been charged with seditious conspiracy by the Justice Department for their alleged role in attacking the Capitol.

The committee promised to continue investigating the events surrounding Jan. 6 in advance of issuing its final report, scheduled for September. It is also examining new information that has been pouring in, according to Rep. Adam Kinzinger, one of two Republicans on the committee, and other committee members. They say new information has come to light in the aftermath of the stunning disclosures by Hutchinson.

Kinzinger and other committee members have also made it clear that they will hold additional hearings if they believe it will help them understand how the Jan. 6 insurrection came about – and what role Trump and his many associates played in it.

Source:
Jan. 6 hearing to focus on Trump mob. A breakdown of the Proud Boys, Oath Keepers and the attack.

Nicholas Goldberg: Trump’s view — How can I make money off it?

The Spiritual Consciousness of Christof Koch

Girl Gaga’s Born This Methodology Is Unexcited On The Apt Display screen, 10 Years...