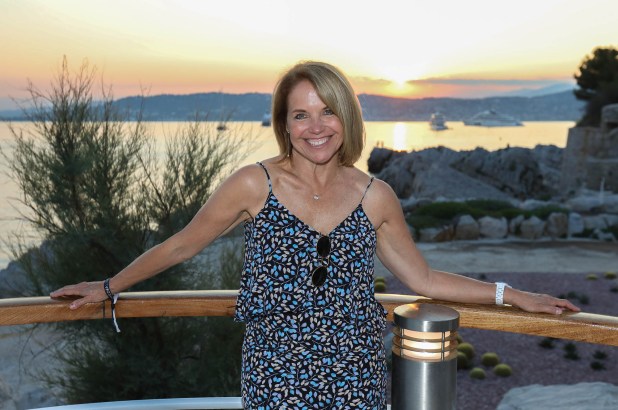 Katie Couric was spotted at Serafina East Hampton having dinner with her daughter.
Getty Images for iHeartMedia

In spite of the fact that some of her closest colleagues have said they’re appalled by the barbs in the book, spies spotted Couric looking “happy and relaxed” while having dinner at Serafina East Hampton on Saturday, ahead of her big interview with Savannah Guthrie.

“She was with her daughter and another family. She ate pizza, and drank water,” a spy told Page Six.

“She looked very happy and relaxed… was smiling throughout the entire dinner,” they added.

East Hampton, where she owns a $6.3 million beachfront home, seems to be a haven for Couric since scuttlebutt about her book — and negative reactions to it — has been making the rounds. She was also snapped on the beach there earlier this month.

In recent weeks, Couric has become the most hated woman in the news biz after several outlets — including the Post — published jaw-dropping catty excerpts from her upcoming book.

In it, she bashes Ashleigh Banfield, who was an up-and-coming star at sister network MSNBC during Couric’s prime, who says she wonders if Couric has derailed her career by publishing the book.

“Her words have really hit me hard. She was my North Star. I always looked at her as one of the most brave presenters … at a time when we were all called bimbos. She was the best morning show host ever. I’m just gobsmacked,” Banfield told the Post earlier this month.

Deborah Norville, whom she also trashes, was “too stunned and, frankly, hurt to comment” on the book.

Others at the wrath of Couric’s pen include Diane Sawyer, Martha Stewart, Prince Harry, her nanny and disgraced former co-host Matt Lauer.

The industry is so ticked off by the upcoming book that she was even banned from promoting it by her former employer CBS. But Couric will finally have the opportunity to explain and redeem herself when she sits down with her alma mater “Today” on Oct. 19. NBC insiders told us the interview will be a one-on-one with Guthrie.

What is Data Science & Why It Matters?