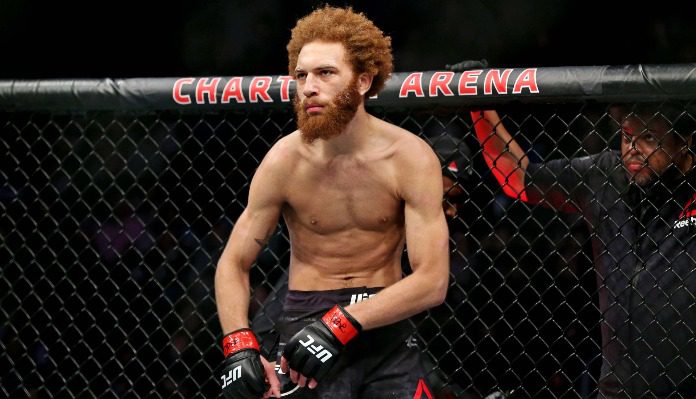 Luis Pena is no longer a member of the UFC’s roster.

Pena was arrested for the second time this year as on Saturday he was arrested and jailed in Deerfield Beach, Florida on misdemeanor charges of domestic violence and battery. He has been booked at the Broward County Jail in Fort Lauderdale. Back in June, he was arrested on felony charges of robbery, battery, and criminal mischief.

TMZ Sports was able to obtain police audio from his arrest over the weekend where Pena’s girlfriend is heard saying: “I really need the cops to come and get him out now. I have scratches and bruises all over me from him, I need him gone. I’m done, and I need help, please.”

“UFC is aware of the disturbing allegations concerning the recent arrest of Luis Pena. Mr. Pena has been open about his struggles with mental health and substance abuse issues and the organization has on multiple prior occasions attempted to help him get professional treatment,” the UFC told TMZ Sports in a statement. “At this time, UFC believes Mr. Pena needs to deal with the health and legal issues in front of him, and consequently has informed Mr. Pena’s management that his promotional agreement has been terminated.”Luis Pena is 9-3 as a pro and last fought back in April of 2021 where he beat Alex Munoz by decision. The 28-year-old is 5-3 inside the Octagon with wins over Munoz, Steve Garcia, Matt Wiman, Steven Peterson, and Richie Smullen. His losses came at the hands of Khama Worthy, Matt Frevola, and Michael Trizano. Pena earned his way into the UFC after competing on The Ultimate Fighter Season 28.

What do you make of Luis Pena of being released from the UFC?

This article appeared first on BJPENN.COM

It came out of the sky: US releases highly anticipated UFO report

What the 9/11 Museum Remembers, and What It Forgets