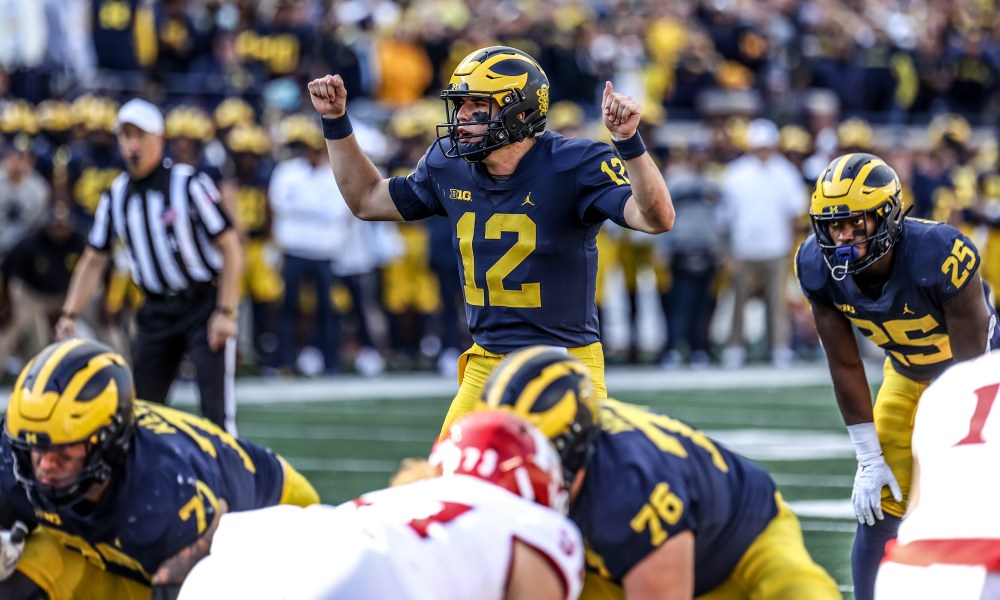 Of course, the top quarterbacks from last week — C.J. Stroud and Taulia Tagovailoa — weren’t going to move from the No. 1 and 2 spot, respectively, given that Ohio State and Maryland were on a bye. But what about those below them?

We did see some middling Big Ten quarterbacks move up in the rankings, because others lost points and moved down. We saw a great performance by Purdue’s Aidan O’Connell in the win over Iowa which caused his stock to rise greatly, whereas some others didn’t exactly shine when their number was called.

As we do every week, these are the rankings of how PFF rates the quarterbacks in the Big Ten, with the advanced analytics determining just how good (or bad) each signal-caller was via execution. These are the cumulative grades through Week 7.

Welcome to the bottom, Jack Tuttle.

Tuttle filled in for an injured Michael Penix Jr. this past week against Michigan State, and it’s safe to say that competent quarterback play probably wins the game for the Hoosiers. However, that’s not what we saw. He was often off-target or behind, missing receiver Ty Fryfogle and tight end Peyton Hendershot. Once Penix is healthy, the Utah transfer is destined to ride the pine once again.

Sitkowski filled in for an injured Brandon Peters two weeks ago, and it still didn’t matter. The offense still cannot score. But, even if Peters is no longer injured, it may be time for Sitkowski to retain the reins to the offense.

Hilinski passed the ball OK against Rutgers, but he lost three points from last week. His job will be even harder this upcoming week when he travels to face a resurgent Michigan football defense.

Mertz rose from the cellar of these PFF rankings after gaining a point in the win over Army. He’s still not living up to the five-star standard that was expected, but he looked a bit better than he has in previous weeks.

Illinois was off this week, and Brandon Peters needs all the time he can get to get back into the right mindset. He hasn’t done much of anything, disappointing for a sixth-year player. He’s dealt with injuries twice this season, including two weeks ago at Wisconsin, but there’s a bona fide quarterback battle in Champaign if he’s healthy enough to play.

He lost his starting job to Ryan Hilinski, but given that he’s ranked higher than Hilinski, we’re including Johnson here.

From mistake-free football to mistake-ridden football, Noah Vedral and Rutgers have turned things around in a bad way. His score rose three points in the loss to Northwestern, but what it appeared to be for the Scarlet Knights seems to be no more unless things change in a hurry. Rutgers has Illinois, Wisconsin, and Indiana next after a bye this Saturday.

Penix is out with an injury, and Jack Tuttle filled in for him. We saw how that went. If Penix was able to play, there’s a good chance the Indiana could have upset the highly-ranked Spartans. If he doesn’t return soon, the Hoosiers might not make a bowl game. Ohio State is up next and Michigan is in three weeks.

Once again including Jack Plummer since Purdue uses him in packages. He started the season as the leader of the offense, but now is relegated to a special role, generally when it wants to give the threat of the QB run.

A near seven-point rise from last week, Morgan finally looked like the quarterback he was expected to be. He set a school record with 16-straight completions, which is endemic to the quarterback he can be. Minnesota will need him more, with Trey Potts joining Mo Ibrahim on the sidelines for the rest of the season.

Sean Clifford and Penn State were off this week which will hopefully bode well for his injury status, given that he couldn’t finish the Iowa game. If not this week against Illinois, the Nittany Lions will need him on Oct. 30 for the Ohio State game.

A near 10-point drop from last week to this one, Spencer Petras was awful against Purdue, throwing four interceptions. Certainly, he’s shown he can lead the team to victory, but one turnover tends to be too much if you intend to be a top-rated quarterback these days.

Nebraska lost yet another close game, though it closed a two-score gap in the waning minutes, but Martinez’s score rose from last week. He’s always prone to at least one big mistake per game, but if he could clean that up, it would change the Huskers’ fortunes in a hurry.

McNamara and Michigan was off this past week, but still rose two spots and he’ll have a chance to get back near the top this next week when the Wolverines face a horrid Northwestern defense. The Wildcats are No. 42 in the country in pass defense, though, so it won’t be simple, and certainly the Wolverines will run the ball more in a game where it should be able to.

O’Connell’s overall grade rose from 74.8 after a stellar performance in the upset win over Iowa. While Purdue is still working with multiple quarterbacks, O’Connell’s arm talent is undeniable, and if he can keep the mistakes at a minimum, this number is sure to go up.

Thorne’s mediocre performance against Indiana dropped him from an 84.2 to 81.8. It was his biggest drop since losing five points after the Nebraska game. While good defenses will always be tougher than not-so-good ones, he has yet to face Michigan and Penn State — two of the top defenses in the conference.

Tagovailoa was idle in Week 7, but will look to bounce back after a not-so-good stretch the past few weeks.

Stroud and Ohio State was off last week, but he continues to rank as the No. 1 quarterback in the conference. He’s not just the top in the Big Ten, but the third-best in the Power Five, behind only Pitt’s Kenny Pickett and Alabama’s Bryce Young.

Donald Trump fined $10,000 a day over failure to supply documents to court