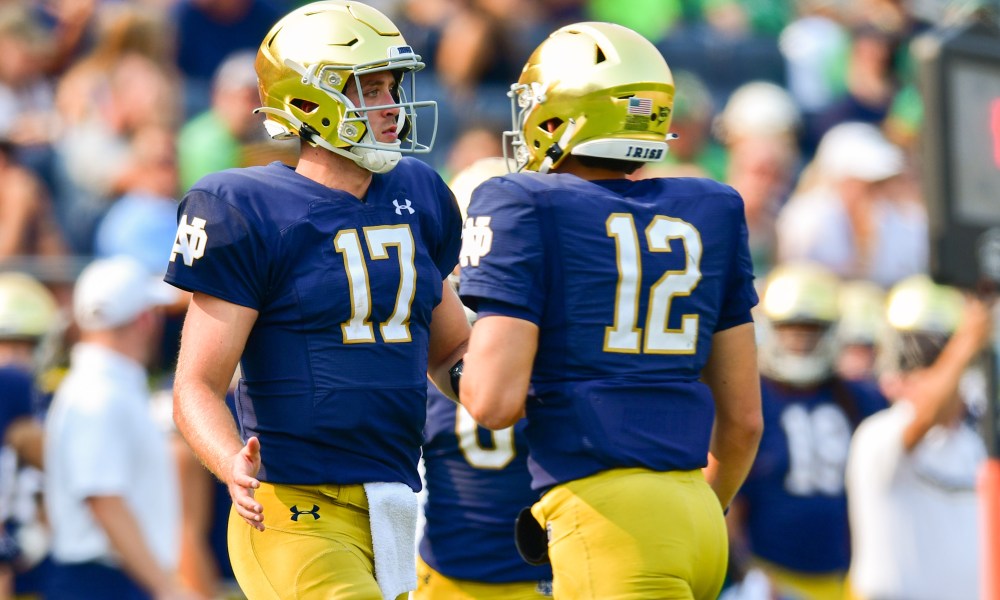 Although it may seem like a difficult situation for the Irish with having a quarterback controversy, it might not be the worst problem for Brian Kelly and offensive coordinator Tommy Rees to have.

Who should start at QB vs. Cincinnati? https://t.co/ArWGIEsNaM

We are all awaiting the word as to who will take the first snaps under center against the Bearcats, but it could be worse. Find out below why having multiple quarterbacks who could get the job done for the Irish is a great situation to have going forward.

At the most important position in all of sports, it’s great to have multiple players who the coaching staff can feel confident about. Right now with Jack Coan, Tyler Buchner and Drew Pyne all having shown they can move the chains, it’s fantastic to have three quarterbacks who can get the job done.

As we have already seen, injuries play a big part in football and having depth at quarterback is a huge bonus.

It brings out the best in us, especially in athletics. When a player knows that they must be at the top of their game every outing, you typically see them perform at a high level.

Each week is seen as a new challenge for the three, which of them can impress the coaching staff enough to see the field on Saturday. Iron sharpens iron and that’s exactly what’s happening in the Irish quarterback room right now.

Entering this season, I had a feeling Kelly would look to the transfer portal for a new starting quarterback after Ian Book departed. That’s exactly what happened when he landed a commitment from Coan. Next year will be much different, as the offense will enter the season with two quarterbacks who have experience and the knowledge of Rees’ offense. Oh, an again the competition factors into this as well as Pyne and Buchner will battle it out for the coveted QB1 spot.

It’s already difficult for the majority of teams to try and stop one quarterback, but how about three? No doubt they’ll focus on Coan, but what happens when Pyne comes in? How about Buchner?

This is Kyren Williams’ 43-yard touchdown run on Saturday. Yes, Tyler Buchner is in the game, which changes the run game math. But this is more expertly blocked (yo, Jarrett Patterson) and poorly fit by Toledo. pic.twitter.com/hkz3DTdecU

They each have a unique skill set to their game that will become increasingly more difficult for opposing defensive coordinators to deal with. They will have to take some of their precious time to get prepared for each of the quarterbacks and it could end up making them more confused about who does what when they’re in.

Source:
Why having a quarterback controversy is great for Notre Dame